A motley band of adventurers finds themselves mixed up in events that could drastically alter the landscape of the plane of Ravnica. 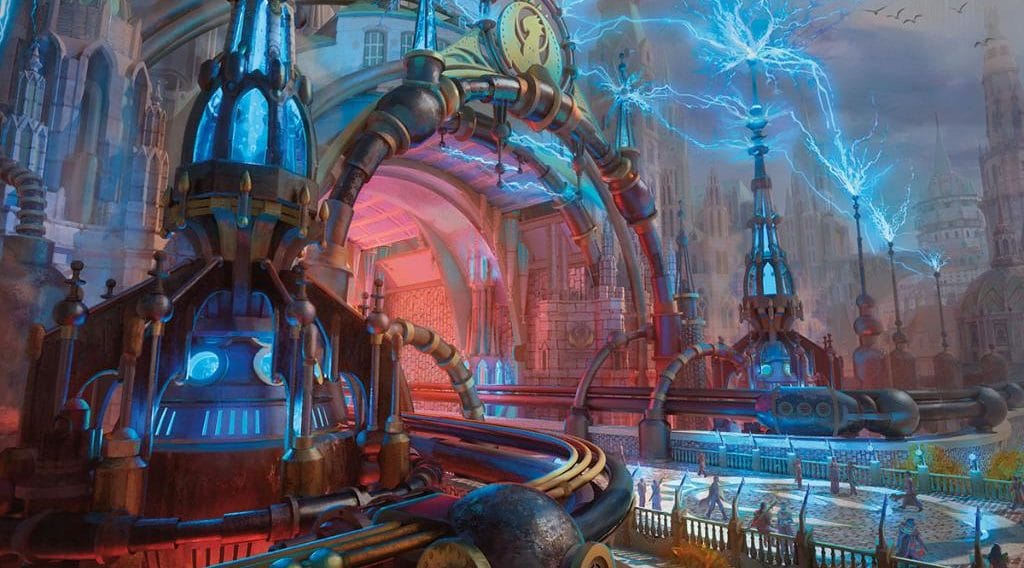 The party is drawn to the devastation of a Weird’s attack on a Izzet lab. They fought their way past both Ice and Lightning Mephits to reach the basement lab of the Izzet building. There they find the still-living form of Bellov, an Izzet scientist who is confused as to why his Weird acted so strangely, as it shouldn’t have broken free of the lab and went on a rampage. He asked for help in retrieving the creature and returning it safel to his lab, which the party agreed to do. 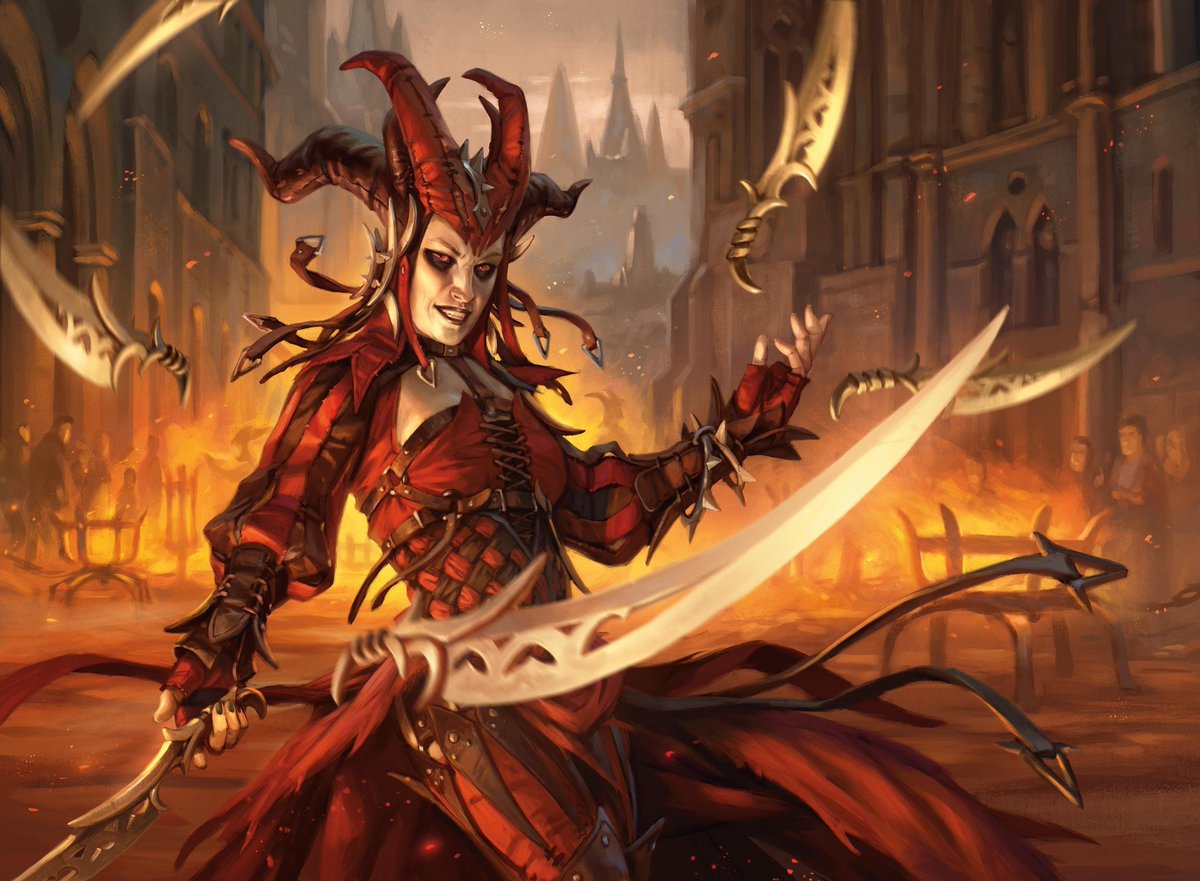 The trail of destruction caused by the Weird led the party to the former location of the Palace of Pain’s Pleasures, a Rakdos construct that is part-theater, part-BDSM facility and can walk on its own! Following the construct’s path, the party finds it and watches the performances of some of the Rakdos performers before they force their way inside. When they get in there, B’eka throws a fit to cause a distraction, allowing the rest of the group to ascend to the private chambers of Ophyira, the leader of the Palace. There, Ophyira and the team work out a deal to take back the captured-by-the-Rakdos Weird and take it home. However, in the process, they discover that Ophyira has been robbed and the thief has taken valuable information on an object known as the Felicity Triskelion! 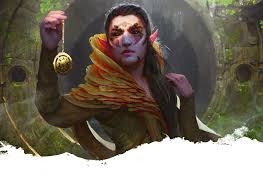 The party is contacted by Azzinax’s ally, Vezska, to perform a task for her. They have to collect specific thought strands for a Vial of Thought Capture within 24 hours. The search takes them to the Millenial Platform and adventures in gardening with a centaur, to the lab of a scientist of questionable skill that may have also been instrumental in the creation of multiple PCs, and to a throw down with members of the Gruul clan, as well as their prey, a sharp-dressed Elf. When all is said and done, even though the Vedalken Sorcerer kept dropping into Death Saves. the party was able to retrieve all the thoughts requested and get paid. With that side quest out of the way, the search continues for the Felicity Triskelion. 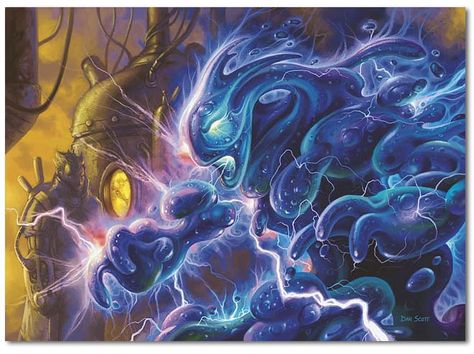 Or maybe it doesn’t, at least not right away. Kavek has the idea that perhaps the party could use the information they acquired for the Thought Strand for Veszka and get the jump on his mysterious client and find the item first.

The party heads to the Ismeri Library to find the book that Argona got from the library that had some hidden writing in it and find the secret passage that Delrim Munn mentioned. Of course, the best laid plans can go awry when Goblins are involved, and it doesn’t take long for things to fall apart. The party draws attention to itself thanks to The Mighty Glob, which leads to the party dispersing around the library for awhile. After Glob continues to cause issues by stealing librarians’ keys and Azzinax continues knocking books off shelves (not to mention Kavek running into a rookie Dimir agent on a mission), the party does eventually rejoin each other in the Philosophy section and somehow get rid of the two nosy Librarian Assistants. With the Assistants gone, the two Goblins and FE LIX scurry down the secret crawlspace. Azzinax deciphers the code to defeat the magical lock on the door at the end of the crawlspace, and they open it to find 4 scrolls inside on a small table. Azzinax is enraptured by the cute, small table and completely ignores the scrolls, which FE LIX grabs. A quick retreat is made and the party tries to inconspicuously leave the Library, although not before Kavek notices the bleeding and lifeless body of the young Dimir agent he had talked to. 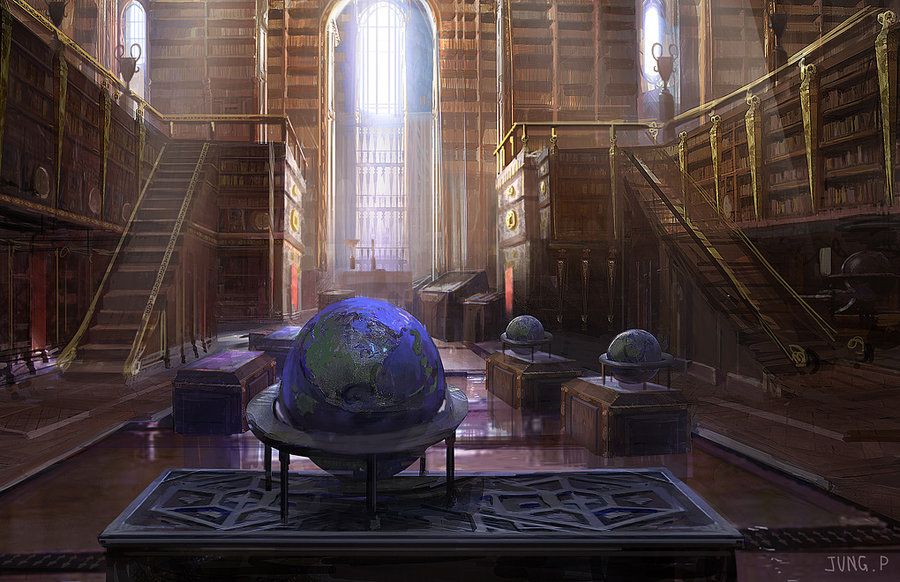 Returning to their hotel, the party takes stock and FE LIX opens the scrolls to see what they say. One scroll is a schematic of the scorchbringer that is the target of both the party and the mysterious client of Veszka. The second scroll is a seemingly random collection of numbers and nothing more. The third scroll is a map of what looks to be an Orzhovian basilica. Finally, the fourth scroll is actually holding a dozen smaller pieces of parchment that contain the names and debts of various debtors of the Orzhov. Interestingly, one of the names on the list is that of B’eka Naymuir‘s father, Nikos Naymuir. B’eka is understandably upset with this new information about her previously disowned father. 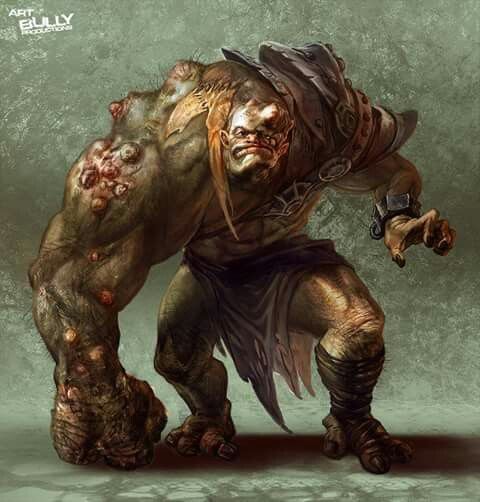 Following the misadventures at the Library, the party moved on and returned to their mission to find the Felicity Triskelion. Their investigations took them to the village of Brobourg in the Golgari-controlled Undercity. After meeting a Kraul Death-Priest, the party was told that a visitor had come to see Peren in the house where Peren was staying and never left. Getting there, they found Peren and the second person gone, but they did find the horrific mutated form of one of the two in a blood-splattered room with Triskelion next to them. A desperate combat ensued and Kavek once again came close to death two seperate times during it, but ultimately the team prevailed. The Mighty Glob tried to pick up the Triskelion with his Unseen Servant, but was knocked for a loop by a magical backlash from that attempt. The party then took precautions to avoid touching the dangerous device and wrapped it up in layers of clothes before depositing it in a box.

Leaving the Undercity, the party comes back to the surface to find a party of Azorius Arresters waiting for them. While The Mighty Glob quickly turns invisible and darts out of the commotion, the rest of the party is taking into captivity and escorted to Arrester Station 13. 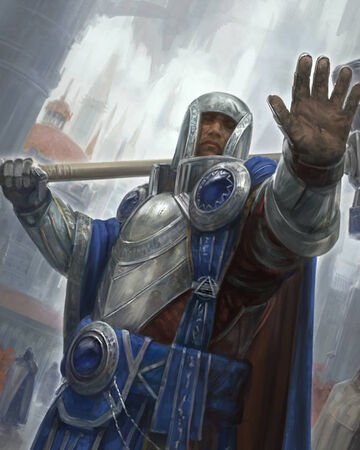 At the Arrester Station, the party is put into the cell of a powerful Gruul Druid of the Old Ways. Dismissive of the party, she warned that her friends were coming to get her and they should stay out of her way. Meanwhile, FE LIX made use of his mutant ability to pop out echoes of himself and swap places with it easily let himself out of the cell. As he explored the cellblock, he was unaware that his ally, Glob, was also in the prison invisible and looking for a way to help his companions. Tomfoolery ensued as FE LIX was caught out of his cell multiple times and Glob pranked the officers and unlocked cell doors, but ultimately, they were unable to get away because the Gruul attacked the station and things broke down in the prison.

Attempting to make an escape, the party meets up with the very Arresters that captured them and their boss, Caipai Nadaal. With the Station looking outnumbered by the Gruul outside, the Captain offers up a pardon if they’ll help fight off the Gruul, but not before Azzinax finds his beloved spider and table. 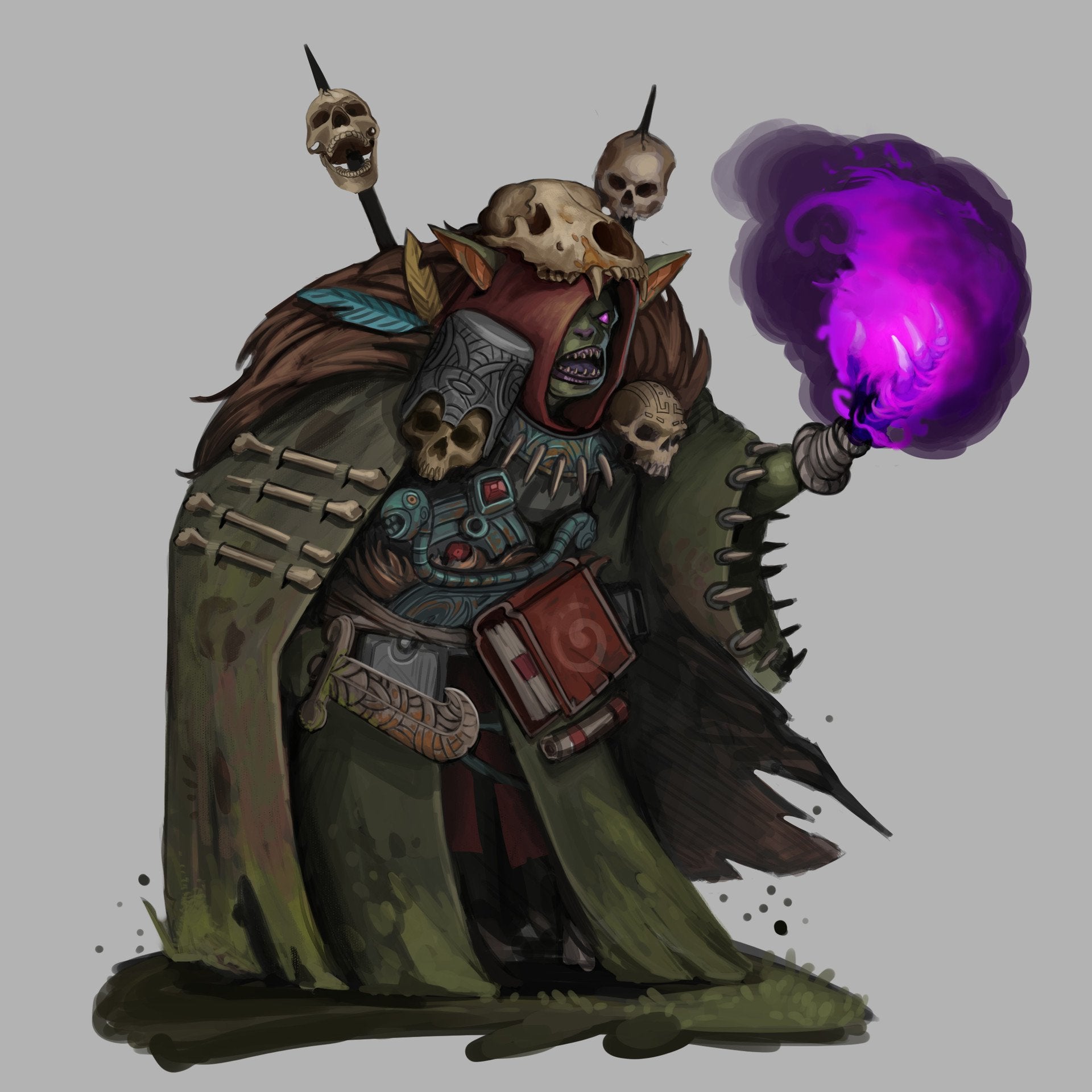 While Glob hides in the evidence lockers with the Triskelion, the rest of the party deals with multiple attempts by the Gruul to breach the Station’s defenses. As this is happening, the Druid tries to avoid detection and assist her allies in getting in. Ultimately, both the Gruul outside and the Druid within are stopped by the party and the Station holds fast. The unconscious Druid is escorted back to her cell. However, while walking past the evidence lockers, the precognitive mage, ??, has a painful vision of what could happen if the party doesn’t be careful with the deadly artifact in their possession. While they deny actually having a dangerous artifact, the Captain suggests that the “hypothetical dangerous artifact” should be taken to a Loxodon Sagittar, Vasool of the Selesnya Conclave for further advice on what to do with it. With that advice given, the PCs are escorted back to their cells for one more night before release.

Meanwhile, with the chaos over, Glob hops out of the locker, kisses the still prone and senseless Precog Mage on the forehead, and walks out of one of the ruined doors of the Arrester Station to await the release of his allies. 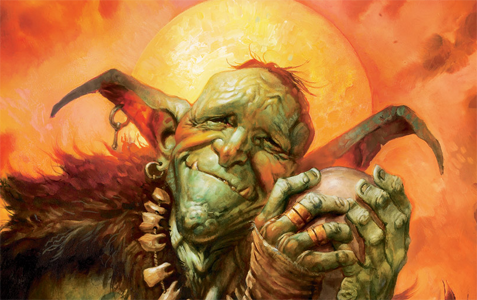 The Felicity Fiasco & Other Stories of Ravnica Bronn1 Bronn1

The Felicity Fiasco & Other Stories of Ravnica Comments

I'm sorry, but we no longer support this web browser. Please upgrade your browser or install Chrome or Firefox to enjoy the full functionality of this site.